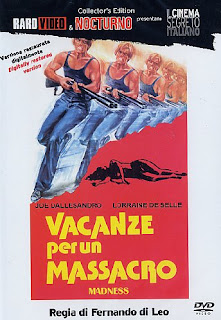 When I first started to review movies on flixter I thought it was ok, I thought it had connections with imdb. But no, when I started re-watch or watching old italian flicks from the 60-80s most of them didn't show up.
For an example this little nice rare flick, Vacanze per un massacro aka Madness. It's an italian (no shit) terror film about an escaped prisoner (played by Joe Dallesandro from Blood For Dracula & Flesh For Frankenstein) who steals a car and heads up for the countryside to find the money he once stole. But the cabin isn't empty, A husband and wife and her sister is there (Lorraine De Selle from the nice cannibal flick Cannibal Ferox).
I had higher hopes from this one after been wanting to see it for years and just now recentely it got a proper dvd-release...
The violence isn't as nasty as in it's collegues Last House On The Left, Hitch-Hike or Last House On The Edge Of The Park but on the other hand it's a fine drama with strange things happening...for example: Joe Dallesandro has the ugliest shirt in the history of movies (maybe not but what the fuck, what man wants to wear that?) and Lorraine De Selle has her clothes on for about 1 / 10 of the film...But hey it's sleaze and I like it, no other country can do movies like the italians...remember that!
4 stars out of 5 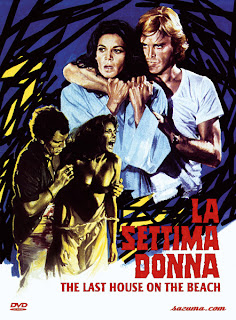 Another movie flixter was missing...
La Settima Donna aka The Last House On The Beach is a nice little terror film from the land of eternal rip-offs: Italy!
Florinda Bolkan from Lucio Fulcis excellent giallos A Lizard In A Woman's Skin & Don't Torture A Duckling plays a nun who are rehearsing a Shakespear play with five teenage girls in "a house on the beach". Three bankrobbers breaks into the house and the nightmare of terror begins...
La Settima Donna have a few disturbing moments but overall it's kinda tame on both violence and sleaze. I don't say that's a bad thing but something was missing when the movie was over, it didn't give me that uncomfortable feel-bad feeling that for example Nighttrain Murders and The Last House On The Left did...
But still it's worth a look if italian cinema is your thing
3 stars out of 5
Upplagd av Dead Moon Night kl. 19:17